June, in Edinburgh, seemed to be a washout in 2019.  There were tales from tennis clubs across the city about the number of matches postponed or cancelled in June due to the weather.  Let’s hope July will be a better month for tennis, and not just because we have Wimbeldon to watch.  As Physiotherapists, we get asked lots of questions about sports injuries and recently were asked about injuries suffered by professional tennis players at Wimbeldon compared to recreational players and keen amateurs. 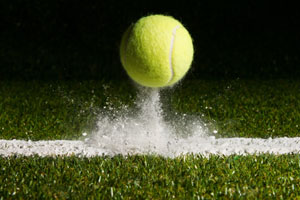 The Championships, Wimbeldon, is the oldest of the 4 Grand Slam tournaments, starting in 1877.  This year matches will be played from 1st – 14th July.  There will be the usual mixture of matches – men’s singles and doubles, women’s singles and doubles, and the mixed doubles.  The medical team at Wimbeldon includes a GP, who will manage the majority of the non-traumatic conditions players may present with such as colds and ‘flu or Stomach bugs.  The Sports Physicians and Physios will deal with any musculoskeletal problems that the players may have.

The British Journal of Sports Medicine published research by I McCurdie in 2016 reviewing 10 years of injury statistics from 2003 – 2012.  During this period there were 12,212 sets of tennis played at Wimbeldon, resulting in 700 injuries.  This gives an injury rate in Professional tennis played on grass of 20.7 injuries per 1000 sets of tennis played.  These injuries can be further categorised at 48% due to trauma, such as a fall on court, and 52% as overuse – the repetitive microtrauma to soft tissues due to the demands of the game.

Shoulder, knee and back injuries were common in both male and female tennis players at Wimbeldon.  Male players had more groin, hip, ankle and heel injuries with wrist and foot problems more common in female players.

However, it is fair to say that most tennis players are not at a professional level.  There are 71 tennis clubs in Scotland, with 15 of them in the Edinburgh and Midlothian area.  We do not know the injury statistics in relation to Scottish tennis but in looking at studies done in America and the Netherlands, the injury rate for student or recreational tennis has been quoted as 1.1 or 1.2 acute injuries per 1000 hours of tennis.  This means that tennis is a safe and low-risk sport.  Nevertheless, it is associated with its own unique set of acute and chronic injuries.

Recreational tennis injury patterns do mirror professional injury patterns, in that acute injuries tend to occur in the lower limbs, such as knee or ankle sprains, a pulled calf muscle or a groin strain.  Overuse injuries tend to present as back pain, shoulder or elbow tendon problems or a wrist sprain.  Continued research into injury statistics will lead to a better understanding of the types of injuries sustained by players of differing age groups and abilities.  This will help in the development of prevention strategies for all levels of play.

We all want to enjoy our tennis injury free – when the weather lets us play!

Back to Articles page